Paris Takes the 2019 Crown - Its Third This Decade

London took third place on the decade's ranking with an average of 2.7, centering upon its spectacular two-year run from 2011 to 2012, coinciding with a highly anticipated Olympics Game and Kate Middleton’s Royal Wedding,

“Fashion is a multi-trillion-dollar industry that enables the ‘have-nots’ to compete with the ‘haves’ on a level playing field. In fact, the highly anticipated (or dreaded) structural change is here,” said Paul JJ Payack, president and chief word analyst of the Global Language Monitor. “In one sense the Third World Fashion Capitals have an advantage over the higher-ranking fashion capitals: they can create low-cost, environmentally friendly, original and sustainable products that are coveted in more established Fashion Capitals of Europe and North America. Lagos, Accra, and Dakar are examples,” Payack concluded.

Spectacular Red Carpet events are having a growing influence on the fashion capital rankings.  No longer the purview of the Oscars and Met Gala, Red Carpets can now be found populating the airwaves, especially linked to the plethora of music awards. The dramatic rise of both No. 16 Las Vegas and No.4 Los Angeles appears to have been significantly bolstered by these events.

Tel Aviv and Tehran in the Rankings

In 2019 Tel Aviv and Tehran joined the Rankings. Tel Aviv ranked 56th, while Tehran took the 57th spot. Tel Aviv, promoted as the “non-stop city”, has a robust, globally renowned, public fashion profile. Tehran, under the leadership of the Islamic state, has a hidden but vibrant fashion scene.

On the watch list for next year include a number of Central and South American fashion centers.

More information about the Global Language Monitor and all of its top lists can be found at Languagemonitor.com.

Based in Austin, Texas, the Global Language Monitor collectively documents, analyzes and tracks trends in language usage worldwide, with a particular emphasis upon the English language. The company is known for its Word of the Year, political analysis, college and university rankings, high-tech buzzwords, and media analytics. For more information, visit Languagemonitor.com. 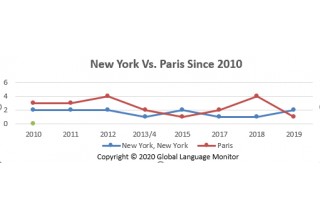 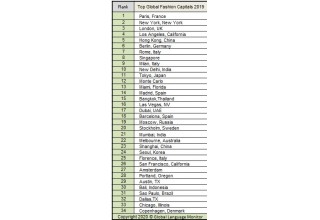 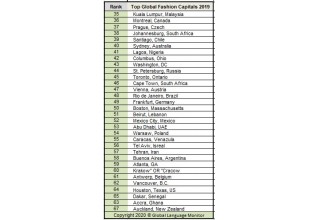 Get notified about new releases.

Sign up for email updates from Global Language Monitor.